Eric loves music, playing guitars, hot sauce and spending time with his family. He especially enjoys time with his niece. Eric’s path to independent living is a success story. It’s also an example of learning to let go and the value of planning.

Eric lives in Cotati, has three housemates, and he’s very happy. His dream for independent living came true several years ago when he moved out of his parent’s home into a shared living situation. In his teen years, Eric participated in an after school activity club with Oaks of Hebron, and it was during this time that his parents, Leo and Adele Barclay, learned about what’s possible. The Barclay’s saw a model of independent living that resonated with them, so they started planning. Adele said that Oaks helped them a lot by providing resources, process and staff, so they did not have to “reinvent the wheel”. This started the process in motion. Eric’s track for independent living really took traction after the passing of his grandparents. 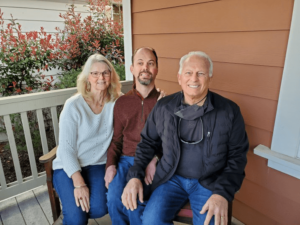 The Barclay’s saw how hard it was for them to work through this difficult time and they did not want their daughter to have to “figure out” care for Eric, so they stepped up planning for his future. Shortly after, Eric moved out with housemates to a home in Santa Rosa. Eric admits that he was nervous at first, and it took some adjusting living with new people, but he’s glad he made the move and can’t imagine his life any better. A few years later, Eric moved into his very own house and brought in housemates.

The Barclays recognized that it was not easy letting go, and they were concerned that no one would care for Eric like they do. Letting go is harder when your child needs specialized care. The Barclay’s said that this is where “support from Oaks was very valuable. Knowing that Oaks was very experienced with supported living situations and had quality staff really put us at ease”. In addition to Oaks making this transition easier, the Barclay’s really benefited from their support network.

The Barclay’s have a large support network of family and friends. A network that they know will be there to listen, guide, and help with any practical needs. The Barclay’s also know that this network is also there for Eric as well. This network gave them the courage needed to let go. They recognize that not everyone has a large network and their encouragement to others is to use the support network they have, no matter the size, and start the process. “It’s a natural tendency to not want to let go, but do what’s best for your kid. Your child will always be your child and you want to let them fly; you want them to be successful”, says Adele. There have been many benefits to Eric living on his own and working with Oaks. Leo especially appreciates that Eric utilizes his staff, so he can be dad. There is a big relief knowing that life events can be handled by staff, so he does not have to jump in and be house manager.